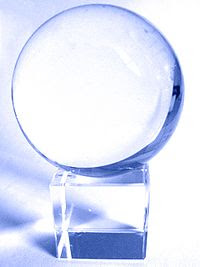 It seems to be a common practice for newsletters, newspapers and magazines to publish expectations for how trends in technology is going to affect our everyday life in the coming year.

As Gartner already discovered several years ago, some of these predictions turn out to be mere hype, not yet ready for large scale implementation, while other trends seem to emerge without anybody watching until they are suddenly there.

With a clear risk that some of my predictions will fall in the first of these ditches, I will try to come up with a qualified guess as to what kind of e-Government solutions we can expect to see in 2011 – not in every country – (particularly not my own home country, Denmark, who will be stuck with an election that will be a decisive factor in any kind of new investments in e-Gov) – but at least in some of the other, more advanced countries.

So let's look at:

Everybody is fascinated about the rapid take-up of the iPad. The impact for Government will be clearly best suited for the education and and training area with lost of new teachware applications based on Apps and networking solutions. However, I expect the education sector to focus much more on the Android marketplace due to the pressure on costs, while the iPad will be reserved for the more expensive segments, interactive magazines and business applications, where the tie-in to Apple is of lesser importance. For the real large scale market it is going to be exciting to see if Tata's new 30 $ tablet PC takes off. If this is the case, ICT literacy in the third World may become a reality.

Cloud Computing and eGovernment at this stage seems to a bit of a contradiction; until the privacy issue is solved and firmly agreed upon between EU, US and Asia, Cloud computing in Government has to be restricted to private clouds where the actual location of data can be proved. If however, a new 'safe harbour' agreement can be made between EU and US we may begin to see large scale cloud computing for a lot of central and local government solutions. The pressure on economy and costs inevitably points in this direction, but my best guess is that before Cloud Computing can become a dominating factor for e-Government, at lot of consolidation and a phase of virtualization for major, old fashioned applications has to be made. As the cobol programmers are dying out, there will be a market for new main frame skills as this will be the next step before virtualization and before cloud computing for real.

Social Computing and eGov2.0 has been on the agenda for quite some time – and even if recent OECD analysis and predictions seem to demonstrate that a large number of public sector managers expect that web 2.0 is just around the corner in several corners, the up-take in reality has been quite slow. Where it has been emerging it has clearly been implemented in a sort of protest against existing 'official' solutions. In UK, for instance, the group that has published a mash up solution to identity which farmers have received the most funding from EU, is one example. 'rate my teacher' in US is another.

In some countries Government has tried to open up databases for the public – but only in a vey limited scale. In Denmark, for instance, the Minister for IT awarded an innovation award to a Danish girl who produced a GPS-based mash up that could tell the shortest distance to a public toilet. Practical, but hardly an example of citizen inclusion. My expectation is that in 2011 the best eGov 2.0 solutions are still left with the rebels.

Interactive Health Care (formerly labelled Telemedicine) is long overdue and it my hope and expectation that 2011 will see the first real, large scale applications aiming at supporting chronically ill persons in their own home. The cost pressure is simply too massive to let this low hanging fruit untouched. The major problem is not the ICT equipment as such but how to rethink the organizational aspects behind the solution – hot line support services, surveillance personnel, lines of communication with doctors, specialists, hospitals. I dare state that any of the Nordic countries really could start this on a large scale so we could move from the pilot state of affairs where we have been stuck for the last 10 years.

Mobility and Identity Management will most likely be 're-invented' in 2011. Now that most EU countries (expect Denmark) has issued smart card ID-solutions, the next phase will merge intelligent mobile phones with ID-solution and payment cards. This will enable citizens with a limited ICT capability to come to citizen service centre and by means of the mobile get help to access the public services in a secure way. Already in some 3rd World countries the mobile phone is used as a payment device, and there is no reason why we couldn't use this in other more 'advanced' countries.

Business Analytics and large scale computing (also using cloud scalability) is rapidly gaining momentum in the World of Science. But as a predictiontool for social development, economic trends, electricity usage, flood control, traffic control, disease management, the current state of massive parallel computing and the sw-tools around it will lend itself to better use to formulate and test public policies; from demographic forecasts in the 70'es to climate and emission control in 2011 and beyond is a clear line. We have the tools by now, and particularly the climate issue should make this kind of applications much more attractive as an investment area for politicians that look beyond their own nose.

Green computing is really a combination of virtualization, mass storage, cloud computing – and maybe also open source computing. As computers account for 2% of all electricity consumption and 2/3 of this is really costs of running idle, the ICT industry has to assist in optimizing use of power for ICT. And the public sector seems to be extremely well fitted for being the first area where ICT could be utilized in a much more intelligent way. The next step, as we have seen in some countries, will be to invest in intelligent electricity networks and to use international exchange systems to optimize the use of power.

So there will be a lot to look for during 2011 – as a tax payer I will state that any government has an obligation to review current use of ICT - not as a stand-alone exercise, but in a close relation with the strategies and policies to make the public sector more efficient, fine tune processes and skip outdated procedures, re-use data and information and empower the citizen in a way that will make it much more attractive not only to use self-service, but also to participate socially and assist relatives, neighbours and people in the local community. It will probably be the only way the Western Welfare Society as we know it may survive.