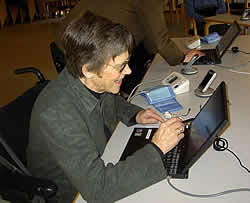 ( Picture from the Aarhus Eldertech Study)

Recently I was invited to participate in a meeting preceding the start up of a special line of bachelor education at the University of Southern Denmark focusing on Welfare Technology. It seems to be the first university level education aiming specifically at welfare as a technological focus area.

This topic has gained increasing clout during the last couple of years, backed by the Danish Technological Institute, medical organizations and larger cities like , and .

It is expected that this represents a new growth area for Danish Industry and could play an important role, particularly to meet the growing need for health and care personnel as a result of the ageing population. Checking the origin of the term on the net, I found that the first mentioning of Welfare Technology to my astonishment was actually a project, were I had participated as advisor: In 2006 the Danish Technology Board started a project called ‘New Technology for Elderly Care’. In this project we tried to distinguish between technology which is merely focusing on saving physical labour and technology, which actually supported elderly and/or handicapped persons with control of their own (chronic) disease, physical environment, increased mobility and better social contact. It seems that this distinction between objectives has been generally accepted.

In 2007 almost when the Danish project was being finalised, EU launched a program for funding joint initiatives within the member states and associated states called Ambient Assisted Living, clearly focused on elderly. As commissioner Viviane Reading stated at the start of the project:

"There is no reason for older people in to miss out on the benefits of new technologies. The solutions and services resulting from this programme will help them to remain active in society as well as staying socially connected and independent for a longer time. "

At this point 2 calls for proposals have been conducted: The first in 2008 focusing on “ICT based solutions for Prevention and Management of Chronic Conditions of Elderly People” and the second round this year with a focus on: “ICT based solutions for Advancement of Social Interaction of Elderly People”. One might expect rather narrow sighted projects to come out of these specific objectives, but looking at for instance the Persona project from the first call, it doesn’t seem to have influenced the project partners, and the Persona project is really a holistic type of project trying to take the various aspects of self-managing and personal control as well as social inclusion into consideration. The city of Odense and the Danish MEDCOM organisation are very active here.

But welfare technology has more actors than the handicapped/elderly persons and their relatives: If technology is deployed to increase the living conditions and diminish effects of chronic diseases and variations in health, it has to be seen in context with the entire health community and the services related to it – potentially embracing all the players in the field.

In order to make a technical proof for this type of technology and the need for an IT infrastructure behind the gadgets and measurement equipment, IBM DK has participated in a number of projects trying to test both the validity of the technology as well as the infrastructure – and not least: together with the caretakers and the users find out if the interfaces was understandable and if the technology was seen as a help. One of the first projects of this kind was the Eldertech project with the city of Aarhus. (Or download brochure describing the project ).Also the and the Alexandra Institute participated in this very successful project. Also the city of , inspired by the Technology Council report, last year started a project aiming at improving the quality of life for elderly people living at a municipal old age home, Sjölund.

A new organisation has seen the dawn of light in : Carenet (http://www.carenet.nu )

So it seems that the level of activity in Denmark is very high, and I expect one of the reasons behind this is the timing of the administrative reform, where 275 municipalities were merged to a mere 99 but with an increased responsibility for health care and for people suffering from chronic diseases.

But we are still in the early days – we need to take the positive experiences from the first small scale projects and expand them to a much larger group of citizens. At the same time we need to have a set of recommendations for investment in Welfare Technology: It may be all right to introduce an artificial seal for people suffering from Alzheimers and to introduce the WII game to keep people active, but the real challenge will be to create the tru infrastructure for gradually adding new services and gadgets as technology evolves.

For that we need a set op open standards – as the international CONTINUA alliance is aiming at, and we need to have Danish Software providers and manufacturers to work together to create an open, yet secure set of framework and building blocks. The Danish organisation for Open Source Vendors, OSL, has engaged in an initiative to engage manufacturers of Welfare Technology to apply open source based SW as well as open interfaces. This initiative will lead to seminars and networks with members of the Danish Industry – and possibly also manufacturers and providers from other countries. For those interested, pls. send a note to OSL at secretariat@osl.dk and you will receive further information.

The European Union and web 3.0 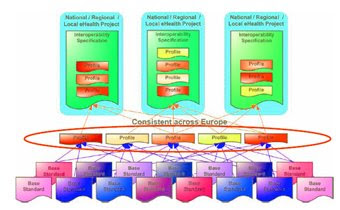 Already in October 2008 the European Commission launched a consultation on Web 3.0 to try to position and to communicate a strategy to the member states during 3.rd quarter of 2009 proposing a policy approach “addressing the whole range of political and technological issues related to the move from RFID and sensing technologies to the Internet of Things”

This indicates that at the time of the initial consultation, the commission’s view of Web 3.0 was more focused on the ‘internet of things’ than the current understanding of being the semantic network of interrelated data, or as Tim Berners-Lee put it: “The Semantic Web is an extension of the current web in which information is given well-defined meaning, better enabling computers and people to work in cooperation.”

During the Autumn a number of external experts critized the Commission for lack of innovation and understanding of web 3.0. See for instance this blog critizising the Commisioner Vivianne Reading: http://blog.semantic-web.at/2008/09/30/eu-commissions-short-sighted-definition-of-web-30/

So what is the current status of EU’s view on web 3.0?. In January 2009, Gerard Santucci, Head of Unit from DG Information Society and Media, presented his and his unit’s view on the status of the IoT for the conference on the Future of the Internet. At this point the EU seems to begin to focus also on the tremendous amounts of data that could be available – either as a direct result of collected data through the IoT or by making data available online, so Santucci in his paper also stressed the need for security around it: “The exercise of data subject rights in the context of intelligent networked environments will require the creation of complex Identity Management systems, based on interoperability, identification, authentication, and authorisation.”

In May EU hosted a conference on the Future of the Internet in Prague. This was a step towards a much more comprehensive understanding of the potential promises of the semantic web, and an excellent video was presented here. Also the Swedish Government, before their presidency of ERU beginning , was present and demonstrated through State Secretary Leif Zetterberg a more forward looking attitude, but again no mentioning of the opportunities and issues around the potential for a semantic web in . His focus areas were 1) formulate a new ICT strategy for Europe from 2011-2015, 2) Harmonize use Digital TV Frequencies in Europe as well as creating one common market for telecommunication industry, and 3) aiming at a secure infrastructure. But no words on making public data available or securing interoperability to create a whole new web 3.0 market place. Hopefully the Swedish Presidency will redress this during the fall.

In June the commission launched an action plan to embrace ‘The Internet of Things’ (IoT) including a comprehensive list of sub-action items, 13 in all ranging from Governance of IoT, over Privacy, Risc Assessments, Impact on Society, Need for Standards, Research Needed, Public-Private Partnership for IoT, RFID Issues, Institutional Awareness, International Dialogue to Measurement of the Uptake. But not much information about one of the key issues in the i2010 Strategy for ICT: Creation of a Single European Information Space with a strong emphasis on Content Online, as stated by Ken Ducatel, Head of Unit from DG/INFSO responsible for the follow-on program to the i2010 in a presentation in March 2009.

In May 2009 a group of international experts called upon the EU Commission to increase focus of solving the inherent problems of the current infrastructure and standards in the Internet:

“The Internet was never designed for how it is now being used and is creaking at the seams. We have connectivity today but it is not ubiquitous; we have bandwidth but it is not limitless; we have many devices but they don’t all talk to each other. We can transfer data but the transfers are far from seamless. We have access to content but it can’t be reused easily across every device. Applications and interfaces are still not intuitive, putting barriers in the way of the Internet’s benefits for many people. And, since security was an afterthought on the current Internet, we are exposed in various ways to spam, identity theft and fraud.”

So the experts is trying to put focus back again on some of the key words for web 3.0: Seamless data exchange, re-use of content, open interfaces. Plus – of course – the challenges raised by the mere fact that we are running out of addresses in IPV4 and need to plan for IPV6 as fast as possible.

The timing of this statement is quite crucial as the hearings for the next ICT Strategic plan – the i2015 – is just about to start, and the more consultations with experts and with country spokesmen that point to these problems, the more likely it will be that EU will see the potential of the semantic web within a short time frame.

In some areas, particularly Health Care, it is obvious that a clear use of semantics is a mere necessity for cross border interoperability and for exchange of electronic patient records, a long lasting problem of standardization even within each member country. (, for instance, has got at least 5 different standards for EPR’s).

In June 2009 EU organized a seminar for ‘Ontology-driven interoperability in eHealth’. This marked a midterm in a 3-year project trying to define the standards needed and the necessary steps towards interoperability in the eHealth area. The Picture above illustrates the problem. In this context the organisations involved cover the key players for web 3.0: CEN, CENELEC, ETSI, W3C, ISO, OASIS and the more health care oriented standardisation committees CONTINUA and IHE. The eHealth domain as well as the eProcurement domain which I mentioned in my earlier blog on web 3.0, seem to be well on their way towards practical results and methodologies that can be deployed by other domains.

While EU is gaining its forces and collecting input from all over on the upcoming priorities, the web 3.0/Semantic web environment is slowly progressing, for each day and month producing simple-to-use, practical tags and definitions. See for instance these 4 examples of practical microformats enhancing exchange of information on personal identity, calendar inputs and other:

In the meantime, led by David Osimo, a crowd sourcing initiative is taking place to create the People’s declaration on the i2015. Suggest you visit the page and register and vote for the top priorities. As of to day the top rated recommendation is: release government data in free, open, standard, readily available, accessible formats Or – if you want to participate in an upcoming event on the semantic web and it’s potential, register at: http://iswc2009.semanticweb.org/