Sarfarissoq – 'Where the current gets strong' 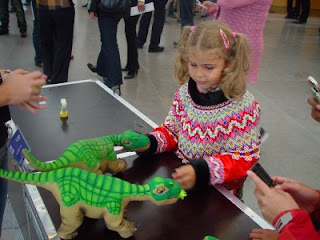 Last week I had the pleasure to participate in a major conference in Nuuk, focusing on the future use of IT. Until now the external communication lines into and out of has been via a satellite with low bandwidth and high costs as a consequence. Later this year TeleGreeland will open 2 brand new high speed sea cables from Nuuk to Halifax and from Qaqortoq to and from there to . This corresponds to a 60.000 times increase in capacity.

Along the coast of the radio chain capacity is being increased, so that within a few months every tiny village in will have similar capacity as and US.

To celebrate this and to open up the eyes for the many possibilities that are now within reach, I participated in the planning and execution of a 3 day conference in Nuuk’s beautiful conference Centre, Katuaq, attracted more than 350 participants from all areas of the society: The home rule departments which. Municipalities, Health Care and hospital centre, education and university, trade organizations, Media industry. And as the conference also had an exhibition arranged by the InnovationLab from Aarhus, also a lot of schoolchildren visited this to play with the IT Dinosaurs, looking at and trying the new ways of learning, the 3D printers and IBM’s medical ‘hub’ – a Google like interface integrating Medical records, X-ray pictures etc . by pointing on a 3 D model of the human body.

The list of speakers included Flemming Jensen, well known entertainer and former teacher in . Preben Mejer – A journey into the Future, John Patrick, former IBM Executive and Internet director, Lars Toft from Ericsson on wireless broadband – and then on the second day a split into 5 streams:

e-Trade with Per Rasmussen and from IBM Anders Sabra, demonstrating websphere portal and commerce, e-Home with Birger Hauge from Digimark and Flemming Jensen, e-Government with the CIO from Reykjavik, Hjortur Gretarsson and myself, e-Ducation with Christina Brodersen from Aarhus and e-Health with Peter Lundkvist from IBM Acure.

The break-out sessions attracted even more participants than the first day, also because part of the sessions took place at the University, at the Hospital and at the Greenland Radio TV, KNR.

At the summing up session, the recommendations from the speakers were:

- eTrade: Need for public-private partnership to set up portal to make visible.

- e-Ducation: Low hanging fruits are language teaching, distance learning to teachers and then to pupils to expand and secure quality in education regardless of distance

- e-Citizen and e-Government: Citizen centric portal, speed up digital identity program and use of social networking

- e-Health: Accelerate program for telemedicine, increase network between professionals, patients and relatives, focus on prevention and treatment on chronic diseases for people living in their own homes.

On the 3rd day we had a special session for the public sector and top industry leaders. Hjortur from Reykjavik addressed the need for Governance in IT in the public sector, stressing the need for a Change Management committee to control operations, a SW Application committee consisting of the top line managers to decide which new projects should start, Identity Management and focus on security standards (ISO 27001/DS484) as well as a light-weight Prince2 Project Management model.

I presented the IBM Government 2020 model as a tool for prioritizing strategies in and as practical framework for top managers in Public Sector to identify barriers, opportunities and then select IT strategies.

Finally John Strand, the Tele Analyst, commented on the risc of introducing open competition in a market with only 56.000 inhabitants. The result of opening up for competition could very soon lead to a situation where broadband usage in Nuuk became cheaper but where the cost for the small villages would rise. Also the discussion on pricing structure – flat rate versus a controlled volume-based pricing was discussed. The conclusion from John was that as long as TeleGreenland was owned by the public, it would be up to Government to subsidize specific sectors, such as education, and not a decision that Tele should make.

Finally we visited the impressive videoconferencing centre that TeleGreenland has built up based on the Norwegian Company Tandberg. Even at a price of 1.5 Mio DKR pr. Room, this solution could accommodate easily 6 -10 persons having a video conference and saving travel costs and time. In a country that covers an area from Nordcap to mid Sahara and with harsh weather conditions, this seem like a gift – especially if you combine it with all the goodies in a collaboration suite like the Lotus solution.

At the end of the conference, John Patrick’s wise advise was remembered: ‘Make great plans but take baby steps’

The conference was a great success – and the prime organizers, the CEO of TeleGreenland, Brian Buus Pedersen. The CEO for Kompetencekompagniet, Jesper Kreiner and TeleGreenland’s market development manager Anders Læsøe , had good reasons to be very satisfied with the outcome.

Send med mailBlog om dette!Del via TwitterDel via FacebookDel på Pinterest
Etiketter: First day in school - and then meeting the Dino's at the conference on IT

Following the trail of Future Research it is worth noticing the report that came out of IBM’s Institute for Business Value in Washington a couple of months ago; The institute’s origin was back in the Price-Waterhouse Consulting Company, and since the acquisition IBM has continued to back the long tradition to publish in-depth studies and projections. Last year, the Institute published the Health 2015 report, which contains a number of interesting and challenging predictions on the pressure of the Health sector, but also by stipulating actions and suggestions to meet these challenges.
This year the report on the status of Government in 2020 has a somewhat surprising result, namely that the World essentially is facing 6 global challenges, which may have different manifestations in individual countries, but nevertheless belong to the same ‘class’ of challenge.
The study, which is based on interviews and studies by a large number of Government specialists in and outside IBM, concludes, that the following 6 challenges are overshadowing anything else in the next decade or more:
Changed demographics (See also UN forecasting) – In industrialized, mature countries an rapidly aging population facing the challenge that the number of persons in the productive phase of their lives are becoming few; at the same time that some/many of the developing countries are facing the opposite problem with still more and more young people. This imbalance will lead to pressure on migrations, social unrest and combined with challenge 2, this trend will be huge.
Globalization (Se also UN Report) – free movement of capital, work, migrations of highly skilled workers from developing countries to developed countries, creating even more challenges for the 3rd World, but also much greater dependencies among nations forcing the Nations to try to get on with each other.
Environmental changes – Global Warming will lead to dramatic changes, combined with lack of fossil fuels, changed climates and rising sea level will lead to growing of the deserts but also to changing agricultural possibilities. Migration because of climate changes can be expected. Floods, thunderstorms, heavy rain and forest fires are likely to occur in higher frequencies than to day.
Social relations and networking across boundaries helped by migrations, by breaking down on all isolationism tendencies and regimes partly because of increased communication facilities will create new opportunities as well as challenges;
Increased pressure on social stability (See earlier Blog on Future Research!) – because of a combination of the first 4 challenges, more social unrest is expected – particularly in underdeveloped countries, countries that suffer from the climate change and countries that can expect a high level of immigration.
Technology and the accelerated speed of innovation will provide both challenges and opportunities; while more inventions in personalized medicine, nanotechnology and biomedical research will help us to cure more diseases, this is going to put an enormous pressure on the budgets, particularly in countries with aging populations – but technology might also hold the promise of changing the dependencies on fossil fuel, lead to new energy and transportation systems .

The idea behind the study is that these challenges, the manifestations and particularly the implications of the challenges are of paramount importance for the degrees of freedom and the need for adequate political strategies, that each county will have to face.

The conclusion, if ever a global conclusion can be drawn from observations like these, seem to be that a large proportion of the experts point to the need for collaboration and new ways to exploit the know how of organizations and individuals. Collaboration across departments, sectors, borders, cultural and linguistic barriers (which already today are being helped by the development of automatic translation tools) need to be broken down, and organizational frameworks as well as technologies that help in this direction. Distance Learning, Telemedicine, Social Networking, public safety and security, automatic traffic regulation are just the beginning of what we need to develop much further.
Indsendt af Søren Duus Østergaard kl. 07.56 Ingen kommentarer:

The State of the Future Inspired by Ray Strong, the IBM futurist researcher I met at the WMSCII-conference I scanned the internet for some other authorized and public future studies. One of the most impressive is the UN-project called The Millenium Project.
More than this, UN has now taken it to the World of web 2.0 and anybody can now contribute and add comments and viewpoints on YouTube or directly to their website. See the YouTube introductory videos on these 15 global challenges.
United Nations started this formidable project some 18 years ago and concentrated on the 15 global challenges, that you see in this illustration.
The project has attracted a lot of experts and specialists and are trying to make predictions using an enormous arsenal of forecasting and prediction techniques:
Environmental Scanning, Delphi studies, Futures wheel, Trend Impact Analysis, Cross Impact Analysis, Systems Perspectives, Decision Modeling, Technology Sequence Analysis, Relevance Trees and Morphological Analysis, Interactive Scenarios, Simulation and Games, Genius Forecasting, and a few more. Each year the Millenium Project updates the outlook and evaluation of the so-called State of The Future Index (SOFI) trying to focus on the challenges that have improved and those that have deteriorated. This will result in a ‘wheel’, showing the trend for the challenges. In this wheel, the 6 most important challenges have been mapped since 1990. From this wheel we can observe that UN estimates that both human wealth, intellectual capital (level of education) and health will improve from now on until 2017, where as people’s physical living conditions as well as political and social security status will be extremely challenged; this is due to environmental changes and social and political unrest, that may happen as a consequence of regional climate changes, lack of water, social tensions due to increased migrations.
Other parts of the Millenium Project are focused on Technology, how it will develop and which issues regarding political management and control might result. For this part of the on going study the Scenario method is used, and reading these scenarios will give you the creeps … the Fantasy is beyond the imagination of even Ray Bradbury.
When you have enjoyed these studies, you might wonder what is happening in Europe; I found that the UK ministry of Science most likely is the most advanced in EU, and have now started an ongoing series of so-called Foresight studies. While the UN study is an overall Study looking at the Future in a more holistic way, the Foresight study in UK seem to be much more concentrated on the intermediate term and on technology and technological development as such. But a really interesting collecting of studies, enjoy!
Indsendt af Søren Duus Østergaard kl. 03.02 Ingen kommentarer: