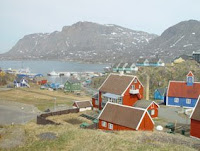 Sisimiut - formerly known as Holsteinborg - is located just north of the Polarcircle. It is Greenlands second largest city with some 4.500 inhabitants. It is clearly an industrial center - the capital for KNI - the Greenland Home Rule owned Industrial company that runs industry as well as the distribution of goods along the Greeland coast including the Pissifik - shops.
http://en.wikipedia.org/wiki/Sisimiut
The hotel capacity is somewhat limited and Sisimiut Hotel seems to be the only major hotel, unfortunately not always serving Greenland specialities - probably believing that the Danes that visit the place as temporary workers, fishermen, engineers, are missing their home cooking
http://www.hotelsisimiut.gl/Engelsk/Frame.htm
The city is named as one of the 4 growth areas in Greenland. Some years ago the home rule decided to abandon a number of the small villages and move the huntersmore or mainly less voluntarily into the bigger cities; there was a need for industrial workers in the fishing industry - which was taken up by women - and for fishers in the fishing fleet. Now as the shrimps are declining, the bigger ships are facing the risc of going out of business. So the challenge is to find new employment opportunities and do it rapidly.
As a side effect of the global warming it has become easier to construct power stations relying on melting water from the glaciers; this has resulted in competitive prices for energy to the degree that Greenland has got an LOI from ALCO to build the next aluminiumfactory in Greenland (Manitsoq). The deal is not done yet - ALCOA wants Greenland to have a stake in the factory and to build another power station to ensure back up. If this deal comes through, Greenland will have an additional income measured in Billions of Danish kroner/year, quickly overshadowing the lump sum paid each year by the Danish Government. http://www.savingiceland.org/node/1123
At the same time exploration for minerals of almost any kind is going on in Greenland; areas that were until now covered in snow can be exploited, and it is expected that in 5-6 years time at least 5 new mines would be opened up. This pits a lot of pressure on the training of the Greenland population. They can't get a job in a mine if they don't know enough of the English Language to understand the security training. This of course is only part of the problem - it is also a matter of culture. The income possibilities for the Greenland home rule is enourmous, even if they don't expect taxes from the mining companies. They do get taxes - flat rate, 40% - from the workers independent of nationality - but the growth created by additional services needed, housing, building harbours maintaining distribition systems etc. is tremendous.
Because of the bottlenecks in Greenland this can easily lead to inflation, so it is a potential problem for politicians. http://www.infomine.com/countries/greenland.asp
In Sisimiut the Danish Technical University together with Greenland home rule has set up the ARCTEC center which concentrates on developing and deploying the special tecniques that are needed in Greenland. The Innvation Centre in Sisimiut operated by the city's Trade and Industria 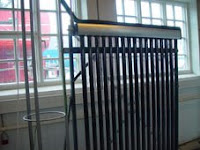 l center is a fine show case on what type of techniques apply to the arctic: They do use solar panels, but a special sort, so-called Chinese tubes, are able to extract energy from a sun that never sets during summer time.
(See also http://artek.byg.dtu.dk/upload/centre/artek/uk/at-pjeceuk.pdf )
One of the problems of the global warming is that the layer of permafrost is thawing. As the roads are laid directly on this layer, this will lead to massive disturbances, for which reason a techniques is involving where new roads are placed on a layer with imbeeded tubes. During summer time, (with 3-12 degrees centigrade), the heat in this layer is used to warm the houses and in this way keeping down the temperature of the roads themselves.
Also we visited the language school that has the responsibility to train 1200 potential Greenlander mine workers in the English language. They are using mixed techniques - partly classes, partly distance learning.
http://www.oqaatsit.gl/eng.htm
Because of a very rigid pricing structure from TeleGreenland (Due to lack of capacity) it has until now been expensive to carry out distance learning using video or heavy audio files. Tele Greenland is this year implementing a sea cable - or rather 2: one from Narsaq to Scotland via Iceland, and another from Nuuk to Halifax. At the same time they are upgrading the radio chain system along the coast and putting in a cable between Narsaq and Nuuk. So in just a year from now we should see a revolution in the application of modern Internet technology.
Another problem is that there has been a lot of focus on making the population real Greenlanders, which means that several years of school teaching without Danish has led to a situation where it is a problem to get a higher education. This almost invariably has to take place outside Greenland - traditionally in Denmark, but US and Canada might also be used.
So we have a backlog of children with no second language skills that simply have to be trained.
Finally the visit to the industrial school in Sisimiut: The school is the sole building construction research and education centre in Greenland. The centre accommodates about 200 students every year and the teaching staff counts around 30 members.
http://www.sanilin.gl/index.asp?lang=eng&num=2
It is encouraging to see the quality of the training again focusing on the specific building skills needed in a harsh environment. Also Sisimiut has an experiemental low energy house which they are happy to exhibit. 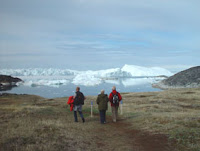 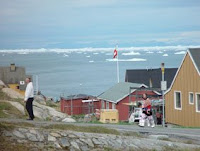 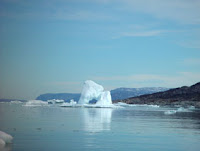